Blockbusters are typically big-budget productions with big-budget marketing and big spectacle releases. The blockbuster mentality values units sold, and how quickly. Releases are typically followed by emergency patches, a scramble to scale services, and media fire fighting. Years of development finally see the light of day and there is a big rush for players to experience everything.

The antithesis of the blockbuster release mentality is a slow-burn approach. Like taking an ember to a kindling, start with a core game loop and a small set of early adopters. Once the kindling catches fire, represented by early adopters engaging with the core loop, slowly add more firewood in the form of new content to grow the userbase. Add too little too slowly and the players will consume the content quickly and move on. Add too much too quickly and there is the potential for players to get overwhelmed and not engage.

The slow-burn approach caters to providing games-as-a-service. Instead of focusing on units sold, focus on player engagement. Keeping a player engaged lets you learn more about them, be able to sell to them for a lifetime, and reward them for their loyalty.

Providing games-as-a-service is like running a theme park. Entrance tickets sell access to the park, in-park stores sell premium experiences & cool toys, and lots of fun activities for players to experience. Backend game services can turn a game into a social experience. Group up with friends, join matchmaking queues to play with others, earn achievements to show off to others, or demonstrate mastery by being at the top of a leaderboard. Online games-as-a-service serve as a virtual hangout for modern gamers. Many of the game experiences are designed to bring friends together and play with a larger community, just as you would in a traditional theme park.

Running a game like a theme park is not easy. A foundational platform is needed to engage with players directly, collect player data for decision-making, and support frequent iterations & updates. There is an operational element necessary to operate the game like a theme park requires additional publishing tasks beyond just marketing & release management to stores. Customer service agents to make sure players are satisfied with their experience. Business operations to manage all the rides, curate the stores, and monitor activity. Community managers to engage with the players and entertain with challenges & activities.

Another way to visualize the product lifecycle for a games-as-a-service is to observe concurrent users over time.

In classic blockbuster fashion, Dishonored 2 has a strong initial growth driven by heavy marketing & sales. As soon as those efforts cease, player engagement declines quickly. This is a classic product life cycle for a single-serving product.

In contrast, Warframe starts with early adopters and slowly grows over time. As the game is provided as a service to its players, a repeatable game loop and frequent updates keep players engaged. As new features are released, new players start to join. Each growth wave maps to major feature releases & a marketing push, followed by a decline but still trending overall towards growth. By investing in player engagement vs. just selling a single-use product Digital Extreme is able to get to know their players better, be able to sell to them over a lifetime, and reward early adopters with loyalty rewards.

Games like Warframe (Co-op), Fortnite (Battle Royal), League of Legends (MOBA), and World of Warcraft (MMO) are all great examples of games-as-a-service. They all have a foundational game platform that they own in order to provide the necessary online services for their games. Building an online game platform is a significant investment but necessary in order to own game & player data, allow for the flexibility to distribute anywhere (store or 3rd party platform), and allow for cross-platform play & progression.

These games usually start small with an MVP game loop and engage with the community early. To fund early development, some have introduced sales of early access through Founder’s Packs to incentivize early adopters. Through early access, game development can gain the operational muscles necessary for a quality experience for their players.

Community events, in-game store promotions, and seasonal challenges help sustain & retain players. The foundational game platform can power special events that keep players engaged. Players will keep coming back for fresh experiences, a place to hang out with their friends online, and to seek mastery through repeated gameplay.

Finally, as the game declines, leverage the game platform for new games. Lead the players into the next game and let them maintain a legacy on the platform. Kickstart the next game in the franchise without resetting the player base.

This is the essence of providing a games-as-a-service. To build a lifetime relationship with players, to be a virtual community space for players to gather, to operate as a virtual theme park. It takes dedication, a sound foundation, and a long term commitment to succeed with a service business model. AccelByte is here to help, learn more at www.accelbyte.io or contact us at hello@accelbyte.io. 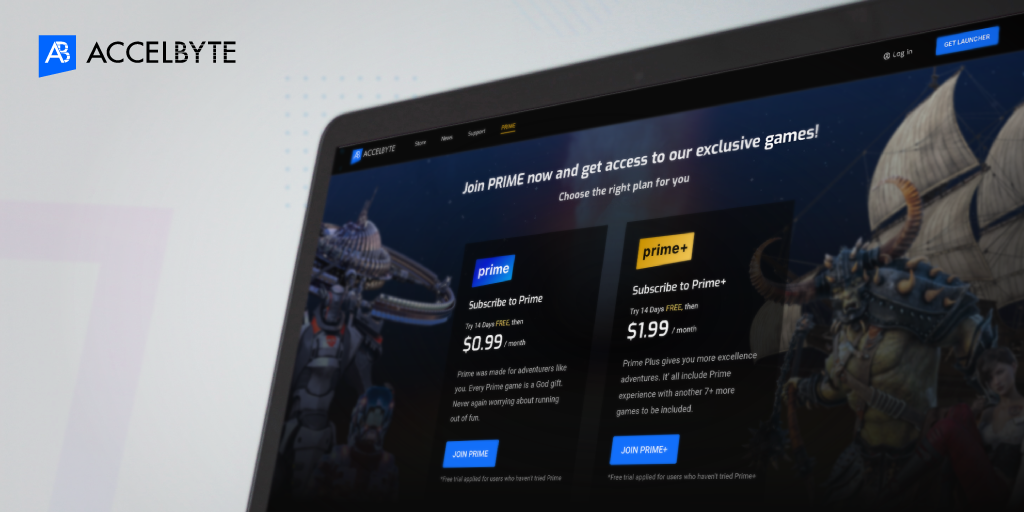